Despite all the progress being made in the field of media and IT, even in interactive media such as video games the user experience is still often a static one. The media format does not recognise the recipient and cannot therefore be adapted to him. In simple terms a video game doesn’t know whether the son in the family wants to play his favourite game taking particularly high risks, or whether it’s his little sister who is sitting in front of the computer screen, despairing because the game is too difficult for her.

The research project “Adaptive Media Worlds” (AdaM), running until the end of 2011 and sponsored by the Saxon State Ministry for Science and the Arts, aims to create a demo of a system which enables media to individually adapt to the needs, mood and social profile of the different users whilst they are using it. By integrating emotion recognition in which the emotions and behaviour of the recipient are recognised and evaluated and the media elements varied, the receptive experience should be enhanced. Elements which can be automatically adapted include amongst others: topic focuses, plots in films and serials, offers in online shops, advertising, and game situations and difficulty levels in video games. Players who like to solve puzzles will then actually get more puzzles to solve in the game. The research project shall illustrate how adaptive systems in video games, online platforms and other internet-based media applications can be integrated and thereby pave the way for a future in which it is no longer the user that has to adapt to the medium, but instead the medium which will adapt itself to the needs of the user. 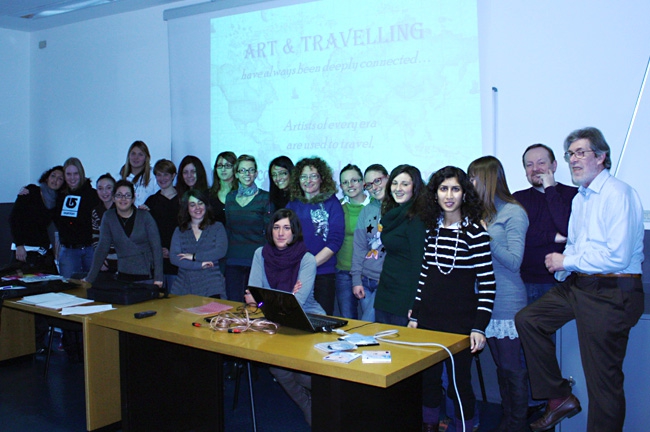 Prof. Wierzbicki was a visiting professor at the University of Bicocca in Milano. He was lecturing on “Cross-Media for Tourism” in the master track “Comunicazione per il turismo” of Prof. Cesare Massarenti. The teaching was part of the ERASMUS programme.

An agreement between the University of Applied Sciences in Mittweida and the the University of Bicocca in Milano was signed in February which includes student exchange: 2 undergraduated and 2 graduated students from each side for one semester per academic year.